Not only leading the HCMC market, the high-end apartment segment tends to affect neighboring provinces. In which, Binh Duong recorded more exciting developments.

According to DKRA Vietnam, in the first quarter, the apartment market in Ho Chi Minh City welcomed a new supply mainly in Grade A (high-end) apartments. Luxury and super-luxury apartments at the price of 100-150 million VND / m2 also increased significantly. The market continues to lack Grade C (affordable) apartments.

Representative of DKRA Vietnam said that Grade B apartments in Ho Chi Minh City are currently at 34-38 million VND / m2, Grade A is priced at 49-74 million VND / m2. This price is quite “soft” compared to neighboring countries such as Thailand, Malaysia … Therefore, analysts predict that the price increase is inevitable because of economic growth and the scarcity of clean land funds.

On the investor’s side, due to many factors affecting input costs and optimal profitability, high-end apartments are prioritized for development. On the other hand, investment in high-end projects also brings a lot of brand value to businesses and is suitable for planning and urban appearance thanks to the project’s architecture, landscape and utility system.

Survey from CBRE shows that the absorption rate of high-end and luxury apartments is about 80% on average. In fact, in addition to financial issues, customers’ requirements, whether for living or for investment, are also increasingly stricter. The income per capita in HCMC and its neighboring provinces is among the highest in the country. The rapidly growing middle class has resulted in an uplifting standard of living.

In addition, Decision 4834 / QD-UBND on the approval of the project “Building housing development program in Ho Chi Minh City for the period 2021-2030” dated December 31, 2020 shows that the city is limited in implementation. investment projects to build new houses, high-rise apartment buildings, if there is no plan to build corresponding and appropriate technical and social infrastructure. Thus, the market will have only high-end and luxury apartments. This is not only a trend of HCMC but also of neighboring cities in the process of urbanization, typically Binh Duong, Dong Nai, Ba Ria – Vung Tau. 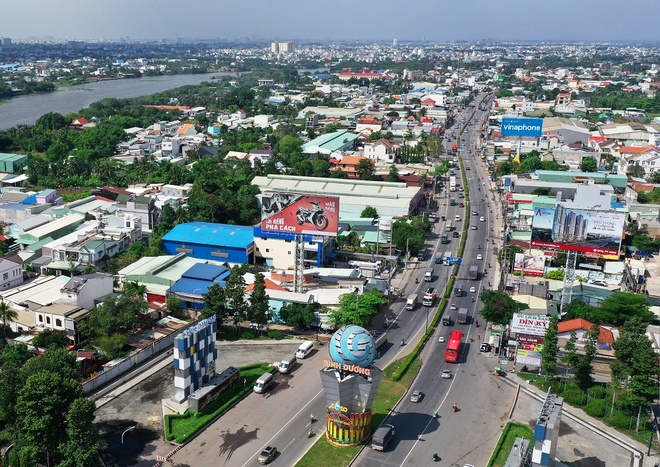 In addition to the large proportion of the mid-end apartment segment, some developers quickly welcomed the market with high-end apartment projects located in the CBD (central business district). and next to Thu Duc city. Therefore, the consumption rate recorded was quite positive.

Representatives of batdongsan.com.vn page assessed that the quality of apartments in Binh Duong changed greatly when there were many investors on project development. This helps to improve the quality of life in terms of convenience, experience, living space, design …

Sharing about the investment advantages of Binh Duong luxury apartment, Mr. Tran Hieu – Deputy General Director of Marketing & Sales Division DKRA Vietnam, analyzed: “On the same price level, in Binh Duong, customers It is possible to choose high-end projects with many modern conveniences, while mid-end projects can only be considered in the suburban districts of Ho Chi Minh City. Not to mention, when the situation of apartments for rent in the inner city of Ho Chi Minh City slowed down, the market for luxury apartments for rent in Binh Duong has great potential with tens of thousands of experts and high-tech workers in public areas. industry in the area ”.

Besides, according to Mr. Tran Hieu, most high-end apartment projects introduced in Binh Duong market during this period are not too difficult to access. For example, at Astral City, the project has a 30% discount program until receiving the house, paying 100 million VND in the first installment and 1% per month thereafter. VPBank provides financial support with a loan of 70% of the product value within 25 years, with grace period of principal and interest financing within 24 months.

With more than 50,000 experts and high-tech workers in industrial zones, the market for luxury apartments for rent in Binh Duong has great potential.

Previously, Binh Duong expanded and upgraded a part of Highway 13, section passing Thuan An City into the largest financial – commercial – service avenue in the province, and at the same time planned to build provincial metro lines to serve the demand. Traffic bridges may explode in the near future.

Progress of the office building in the Grand Marina complex