When will it be easy to build a house in the “hanging” planning area?

For a long time, the desire to build and expand a house that has been so sluggish by time of people in the “hanging” planning areas in Ho Chi Minh City is always burning.

Stemming from the above wish, Mr. Nguyen Dinh Chuc (living in Binh Quoi – Thanh Da, Binh Thanh District, Ho Chi Minh City) always closely follows information related to planning and construction. “Read the news in the press with the content”, after 3 years from the date of announcement of the district-level annual land use plan, the competent state agency has not issued a decision on land acquisition or has not yet allowed the transfer. the purpose of using the land …, the land user is entitled to apply for a construction permit with a term as prescribed “, I am extremely happy” – Mr. Chuc said.

According to Mr. Chuc, his family has 2,200 m2 of land in Thanh Da, but at present he can only rent out agricultural cultivation for 2 million VND / month. “This amount is not enough to take care of breakfast for the whole family. While, if we do not have the planning of hanging for decades, with this land, my family would have changed their life for a long time, not living with difficulties as now” – Mr. Chuc is frustrated. 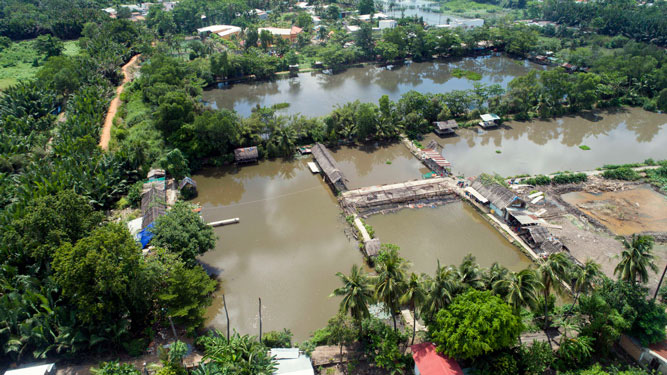 The Binh Quoi – Thanh Da area is still filled with ponds and fields after more than 20 years of “hanging” planning. Photo: HOANG Trieu 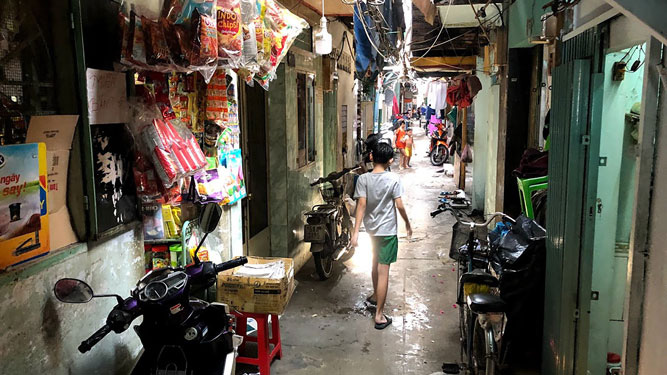 People in the area of ​​Ma Lang, District 1, Ho Chi Minh City live in a cramped area because of the area of ​​planning.Photo: LE PHONG

He compared that if his land was on the other side of the Saigon River in the Thao Dien area (district 2), he could sit on the “mountain” of money. However, his wish to implement the project or delete the hanging plan from the moment he got married until now has not yet been successful. “Therefore, when I saw the above information, I immediately thought that I would build a warehouse for rent instead of renting pond land to increase income. However, when I directly phone the Binh Thanh District People’s Committee hotline to It is new or the above regulation is not for Thanh Da peninsula, but only applies to projects from January 1, 2021 “- Mr. Chuc said sadly.

The city has issued Decision 26 of the People’s Committee of Ho Chi Minh City, which allows for a temporary construction permit, to allow home repairs … for cases under the “hanging” project. “It’s very difficult, uncle, if we want to be able to change the use purpose from rice land to newly built land, if we want to change the purpose, it will be more difficult … god! So my family just kept living hard on … heap money “- Mr. Chuc smiled sadly.

Speaking more clearly about the difficulty in applying for a temporary construction permit in the “hanging” planning area, Mr. Ngo Van Tuan (whose land is located on Tap Doan 6B street, Tan Tao A ward, Binh Tan district) said that he wanted to In 2015, he came to the locality to register to change the use purpose from rice land to residential land, but received notification that the land is under the greenery planning, so he could not change the purpose. Waiting for the project to be implemented forever, in 2017, he went to the ward to continue asking, and he learned that the land belonged to the planned road plan. Continuing to wait, by the beginning of 2020, Mr. Tuan went to the district to ask again and ask to change the land use purpose for 400 m2 of land, then the district will have a written reply to the land in the educational land planning. “I propose to the government to consider early deleting people if they do not carry out the project. If not, then allow people to change the purpose of land use, build houses to stabilize their lives” – Mr. Tuan suggested .

Similarly, hundreds of households whose houses and land are located in the industrial zone project, residential area of ​​384.2 hectares in Xuan Thoi Thuong commune, Hoc Mon district have also been “suspended” for 20 years because they cannot change their use purpose. use the land as desired.

“If this investor goes away, another investor comes but he does not do anything while the people are” suspended “of their rights, the uncultivated land is overgrown. In 2018 I went to the commune to register to change the purpose. I used 1,000 m2 from rice land to residential land, but I registered it and left it there, but no one can handle the “hanging” plan. If the land is not converted to residential land, only rice can be planted but nothing can be built. ” – Mr. Ho Van Hoa (Hamlet 1, Xuan Thoi Thuong Commune) lamented.

Will no longer “land”?

Representative of the People’s Committee of Xuan Thoi Thuong commune said that according to Decision 26 of the People’s Committee of Ho Chi Minh City, households with land plots changed their use purpose to residential land, even though they belong to the “hanging” project, they will still be granted a term construction permit. more than 3 floors for separate houses … However, in reality, the current “problem” is that most of the households in the suspended project are not allowed to change the land use purpose from rice land to residential land, when not changing the category. land use purposes cannot be built.

Facing this situation, the People’s Committee of Xuan Thoi Thuong commune has petitioned the Hoc Mon District People’s Committee to “remove the hanging” for the above project and recently, Hoc Mon District People’s Committee officially announced the plan, inviting investors to invest in the Industrial Park. combined residential area of ​​384.2 ha. “However, many investors come and go because the area is too large while having to negotiate prices by themselves, compensating with people is difficult” – representative of Xuan Thoi Thuong Commune People’s Committee said. He hopes that Law No. 62/2020 / QH14 dated June 17, 2020, just issued by the National Assembly and comes into force from January 1, 2021, will maximize the elimination of suspended projects. forming in the future. By according to Clause 33, Article 1 of Law No. 62, the case after 3 years from the working date

According to our acknowledgment, the new provisions of Law No. 62 are highly appreciated by most localities because of a clear deadline to limit the situation of investors “land” and then leave it, causing a great impact. to the lives of households located in the project area. However, many commune and ward officials also make recommendations to avoid decades of “hanging” in the way of constantly replacing investors, everything needs to be disclosed to the people and commune authorities clearly.

Meanwhile, the representative of the City Department of Construction also affirmed that the new regulations were stricter in minimizing the length of the project as well as ensuring the full direct interests of the people. In addition, the City Department of Construction also informed that in 2020, this department has worked with many departments and branches of the city and agreed to adjust and cancel more than 100 projects in the land use plan since 2015. now. These projects will either be completely deleted or reduced in size or size.

Remember these 12 principles, sales can earn tons of money

24 points to check when handing over an apartment